The BMA has announced details of it’s plans for strikes if the ballot finds junior doctors   in favour of industrial action.

The ballot, which closes on 5pm Wednesday 18 November, could see that junior doctors are involved in the “all out” strike the NHS has ever seen.

The strikes will begin with one day of emergency care only, the same level of service seen on Christmas day, followed by two days of full walk outs which includes emergency care.

Health Secretary Jeremy Hunt has condemned the plans. He says: “Threatening extreme action is totally unwarranted and will harm vulnerable patients. Refusing to talk to a government that wants to improve weekend care for patients and reduce doctors’ hours can only damage the NHS”

Dr Mark Porter, BMA council chair and consultant anaesthetist, defends the decision. When he spoke to radio 4’s Today program he said: “The reason were giving the service this notice, which is three times the length of time required by law, is so that we can plan the service properly to be delivered safely”

He claims that the government has been unwilling to take part in negotiation: “Were doing this because the alternative to industrial action is to get round the negotiating table. But what we’re being told at the moment is unless junior doctors agree to every one of the proposals that are being put forward for a new contract then that contract will be imposed”

Dr Sarah Wollaston, who has was a GP before becoming a Conservative MP tweeted:

The @TheBMA action is grossly excessive, will cause immense harm to their patients & undermine the reputation of doctors

If industrial action does go ahead, one of the key questions is who will the public support?

The breakdown in contract negotiations led to a number of protests on October 17. In Waterloo Palace over 20 000 people demonstrated their support for junior doctors.

Before details of strike action were published, the Guardian Healthcare Professionals Network conducted a poll asking: Should junior doctors strike over the government’s proposed contract? 28,562 people took part. 95% answered yes, 3% said no and remaining 2% were unsure.

This morning the ballot opened for doctors to vote on whether or not to strike. This is the result of a complete breakdown in contract negotiations which began in 2014.

For an overview of the contract follow the link below: 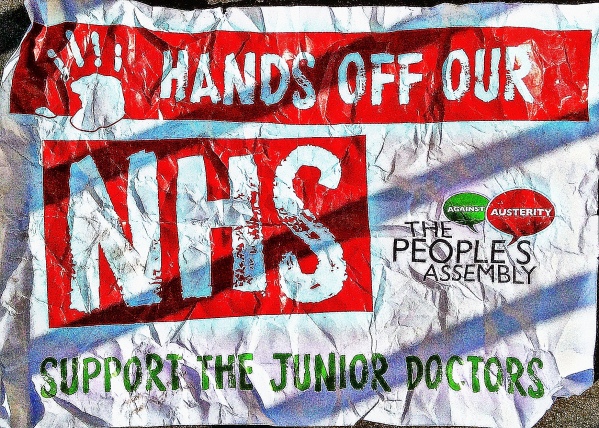