“I have made two attempts to kill myself. At the time I really felt there were no other options and that people would be better off without me” says Maxine Williamson

Through her twenties, she battled depression and post-traumatic stress disorder. Like most people, she believed suicide was a selfish option. But once you reach that point, misery masks itself like logic and you can come to some warped conclusions. “I actually thought it was the least selfish thing to do.”

The distressing root of her illness made her feel she couldn’t talk to her family. She felt like she was a burden. When you’re moving to a big city or starting university, friends can be difficult to find. Tougher still to find ones who you feel able share things with that you’ve never put into words before.

END_OF_DOCUMENT_TOKEN_TO_BE_REPLACED

Around 4% of suicides in the UK occur on the railways. In 2010 Samaritans began a partnership with network rail to combat this. By the end of that year Network Rail reported a 13 % decline in suicides.

These signs can now be found around train and tube stations across London. 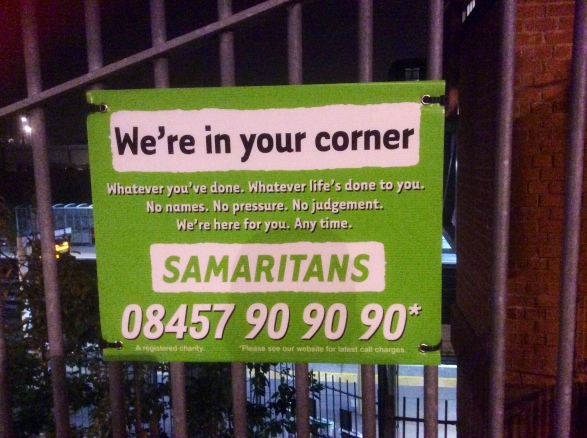 “We have trained nearly 10,000 rail industry staff to spot vulnerable people and intervene if they think they are at risk of taking their own life. Over 175 staff interventions have been reported to Samaritans since 2010, and in the last 12 months, interventions by rail staff have risen by 60 per cent.”

Such a tragic event also impacts on commuters and train drivers. Jasper Hunt, a student at Liverpool University, witnessed a railway suicide. He says “It was really awful, I couldn’t stop thinking about him and his family”

In addition to the 5 million calls they answer every year, Samaritans volunteers hold awareness raising events at stations to help reach out to commuters and railway passengers. The group also supports communities in the aftermath of a railway suicide.

If you feel you need someone to talk with the Samaritans are always happy to listen. They provide a 24 hour, free and confidential service:

In last week’s post LGC confronted the prevalence of suicide in society.

This poster deals with a few common misconceptions and things to do if you think someone may try to hurt themselves:

Professor Green’s BBC 3 documentary “Suicide and Me” is bringing a lot of much needed media attention to the prevalence of suicide.

He sates a humble ambition: “I would like to highlight the severity of the situation and bit by bit remove the taboo that surrounds it.” The hour of footage is extremely personal. Green is sacrificing his privacy for public awareness.

The situation is undoubtedly severe. Between 5000-6000 people commit suicide in the UK each year. That’s more than double the number of people that die in all road traffic accidents, which is under 2000. The vast majority are men, many of them young men.

A study looking at medical records, diaries and testimonies from friends and family has demonstrated 90% of people who commit suicide are suffering from a classifiable psychiatric disorder. But it is important to remember 1 in 4 people will fall victim to mental illness at some point this year so only a tiny fraction of those people will take their own life.

But the shocking regularity of suicide does suggest a lot more needs to be done to support those suffering from mental health issues.

Figures released on Friday by Health and Social Care Information Centre (HSCIC) showed a 9.8% increase in the number of detentions under the mental act since 2014. Detention under the mental health act is an emergency intervention and only used when people are extremely unwell.

The charity Mind reacted to the figures by saying “people are not getting help for their mental health problems early enough, meaning they become more unwell and more likely to reach crisis point”.

Arguably suicide is the action of someone who has gone beyond crisis point. These statistics suggest that mental health services are being spread thinner and less equipped to deal with this epidemic. But it’s only through discussing this difficult topic that we can hope to raise awareness and financial support.

If you feel you need someone to talk with the Samaritans are always happy to listen. They provide a 24 hour, free and confidential service: